Published by No Exit Press 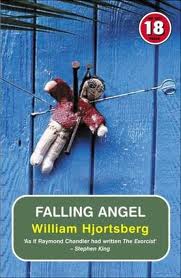 It’s very rare (if ever) that I choose to read a novel from which a movie has been based, but this one’s been sitting on the shelf and trying to tempt me like some faustian pact since buying it years ago.

So, it’s a big thank you to Criminal Plots (http://criminalplots.blogspot.com) and their reading challenge for 2011 which I signed up straight away as it looked like, by doing so, I’d manage to read some of the great books I’d been meaning to get round to and, possibly discover some new gems.

The challenge includes the following sections to select a book from;

1.A book by a new author who’s blurbed a book you enjoyed.

2.A book that has been made into a movie.

3.A book with a protagonist opposite your own gender.

4.A book set outside the country you live in.

5.A book that’s the first in a new-to-you series.

So, diving in at number 2, I grabbed my copy of Falling Angel off the shelf and proceeded to devour it within two sittings.

I’ve long been a fan of the Alan Parker movie starring Mickey Rourke (as PI Harry Angel), Robert De Niro and Lisa Bonet, and it combines my two big fiction/movie loves – the supernatural and the detective story.

So, it’s to my deep shame that I’ve only just gotten round to reading it.

With a tagline by Stephen King that describes it “As if Raymond Chandler had written The Exorcist”, it’s clearly the best mix of the two genres possibly ever to have been published.

Now, I’ve read the novel, I’d really like to have the movie erased from my brain, so I could reread it without all the images from the movie forcing their way into my reading mind.  It would also be interesting to see how many of the, essentially bold print clues, I’d have picked up on if I’d not already seen the movie.

Our protagonist, New York PI Harry Angel, is given a new case at the outset of the book, a missing persons case to locate swing band crooner, Johnny Favorite – who may be also hiding under his original name of Jonathan Liebling.  He sets off to meet his client, the enigmatic Louis Cyphre, at an office at 666 Fifth Avenue.

His initial investigations reveal that Favorite has left hospital care but had acute amnesia.

A sees a psychic, under the guise that the visit is for him, and gives Johnny Favorite’s birthday instead of his own.  She mentions that the birthdate indicates a Gemini and that she once knew of someone who had a twin who had the same birthday – but will tell him no more.

And then the horror starts – steadily, bad things start to happen to people that Harry Angel talks to, deaths start to occur and occult symbols appear throughout.

He meets up with and starts to fall in love with Epithany Proudfoot, who thinks that she might be the daughter of the man he seeks, and there are some classic Chandleresque moments of dialogue between them as PI and femme fatale.

I loved the novel just as much as I loved the movie (which I will likely rewatch this week).  If anything they work very well together as companions.

The biggest surprise to me was that two of the strongest visual elements within the movie, the revolving fans and Cyphre peeling an egg with his long fingernails, are not even within the text of the novel.

Now, I’m just sitting back and wondering what happened after the last page of the novel.

One response to “Falling Angel by William Hjortsberg”