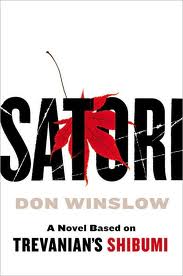 Apologies for a bit of a delay between this review and my last one.

I have been busy and I have been travelling – I have been on a real adventurous journey starting in Japan then to Beijing and to the jungles of Vietnam.

I’ve learned a hell of a lot on my travels; politics, local customs, martial arts skills and just how many people might be out there looking to launch an attack every step of the way.

So, I was very glad that A) I didn’t risk the trip outside of my head and the printed page and B) that I had the excellent Don Winslow as my guide on the journey.

What we have with Satori is what has become known in publishing as a ‘legacy’ title – the reappearance of a character formerly made famous by a previous author.  It’s a similar situation to what we’ll experience later this year when Jeffrey Deaver releases his James Bond novel.

With Satori, Winslow takes over the mantle of Trevanian (the pen name for author Dr Rodney William Whitaker) who died in 2005 and takes us back to tell a prequel to the successful novel Shibumi from 1979 and to introduce new readers to the assassin and master of the ‘naked kill’ Nicholai Hel.

Winslow takes us back to 1951 and to the offer of being released from imprisonment (for killing his mentor) by his American spymaster, if he will accept the mission to track and kill, Voroshenin, the Soviet Union’s commissioner to China.

Through its many countries, cultures and the constant name changes as Hel attempts to remain under the radar of various authorities and those who seek to kill him, I was concerned that I’d be totally lost by the halfway point.

In fact, at two hundred pages into this five hundred page monster I found that the whole story racked up several gears and led me to march through to the end in a single 300 page sitting.

With plenty of tripwires along the way to change the direction of the story and keep the reader on their toes, at least one twist I never saw coming, this for me was a great introduction to the character of Nicholai Hel and to Don Winslow.

Headline are re-issuing Shibumi in May 2011  – so a good chance for me to then find out just what it was about Trevanian’s original Hel novel that led to such adoration clearly given to it which gave birth to such an excellent and engaging prequel.

One response to “SATORI – by Don Winslow”