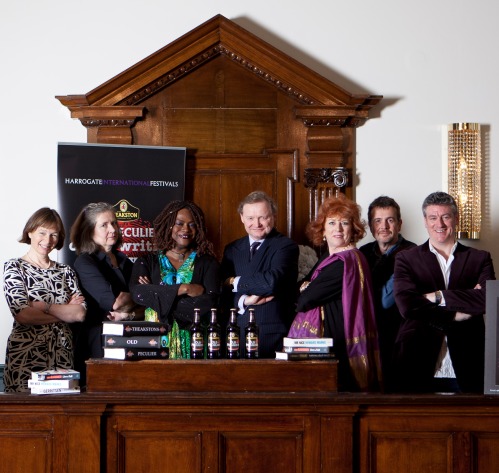 It’s back, they’re back and it’s bigger and better than ever…

As one half of the newly appointed duo of bloggers/tweeters for http://www.theculturevulture.co.uk I was pleased to be in attendance along with Maria Barrett, who has already begun her own creative blog report over at http://angelvane.wordpress.com

There was a great turnout for the launch this year, usually held in the festival’s home town of Harrogate, with Festival Chief Executive Sharon Canavar, Erica Morris and the rest of the team all making the journey south with a van filled with press packs, goodie bags and bottles of Old Peculier. 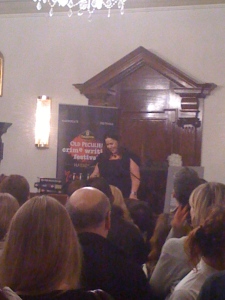 There was plenty of time for everyone to the customary mingling amongst a veritable who’s who of the crime fiction community, before the speeches and announcements took place.

Despite visits to the festival previously and other crime events, it never fails to impress just what a friendly business crime fiction appears to be.

It’s also full of what seem very surreal moments, such as walking into a room full of people and being warmly greeted and shaken by the hand by Mark Billingham, whilst standing beside him was his creation DI Tom Thorne in the form of David Morrisey chatting with Mark Lawson.

It’s a generous community – I spied David Hewson there, prior to his own event starting just around the corner at Goldsboro Books the same night.  Peter James graciously attended, standing in for Tom Harper (current CWA Chair) – a role Peter has recently been awarded to step into very shortly. 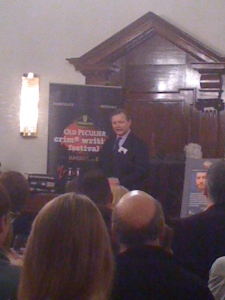 It was something of a challenge to catch a few photographs, send a few tweets to the world outside the room, and to keep an ear on the speeches, all whilst constantly meeting faces old and new to me, so I am very grateful for Sam Robert’s photographs which he has kindly allowed me to use within this post (the four professional shots rather than my shaky attempts).

First up to welcome everybody and to launch proceedings was Festival Chief Executive Sharon Canavar who thanked everyone for their attendance at the evening, reflected on just how the festival has grown from strength to strength, thanks to its partners, attendees and spomsors.

She handed over to Simon Theakston to add a few words – clearly only too pleased for the long established relationship between Theakston and the festival to continue to grow; this being the first in a new five year continued sponsorship agreement. 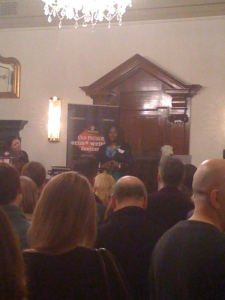 Simon then handed over to the new festival chair.

Dreda Say Mitchell has the task of filling the shoes of last year’s great chair, Stuart Macbride but, with her opening speech advising the audience that the best way she could describe this year’s line up was that it was ‘Hot!’, I think she came across as totally impassioned and more than up for the task ahead.

She spoke of how she never would have believed anyone if she’d been told at her first trip to the festival as part of a New Blood panel that she’d be chairing what is now such a huge event in the crime fiction calendar.

I managed a brief chat with her later in the evening as we’d not met before.  Closest I came was waiting in my car to reverse out of the car park at the end of last year’s festival whilst she did her piece to camera for a tv crew about the festival.  I think she was well worth the wait as she seems more than fired up for the role. 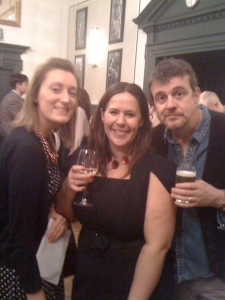 And then it was all about the party, with selected tunes from the collections of Martyn Waites & Mark Billingham things got into full swing and gave everyone the chance to catch up with friends old and new.

Great to see supporters like Steve Mosby, the Shots team, Maxim Jakubowski, NJ Cooper, Claire Seeber, Lee Weeks, LC Tyler, Cathi Unsworth…I could go on, all working the room and, for me, a great opportunity to match up a lot of faceless twitter avatars with their real life three-dimensional selves from the world of publishing and crime. 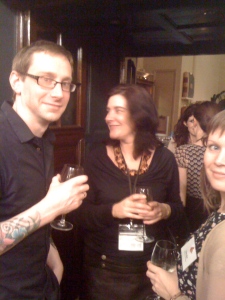 It was probably an hour and a half into proceedings before Maria (my blogger in-crime) and I had even located each other, but even then it was only sufficient time for the briefest of hellos before we each set off again to meet as many of the fine people we are due to spend four days in the company of this July in the lovely town of Harrogate.  Just enough time to get one snapshot of ‘the team’ (below) though;

And so, I’ll leave you with some more of my pretty awful photography and some better shots by Sam and, if you scroll down to the bottom, you’ll be able to see for yourself just what a fantastic line up the team have assembled this year for us all – some real heavy hitting guests this year, some interesting new panels and some twists on some old favourites too.

There will also be another Creative Thursday with classes by Stuart Macbride, Allan Guthrie and Dreda Say Mitchell (details tbc).

So, lots to look forward to.

Huge thanks to Sharon and the whole festival team for a great night, to Sam for providing the better photos and to Emma at Culture Vultures for providing the great experience of covering this event and the main event in July.

Scroll through the photos and check out what’s in store for you. 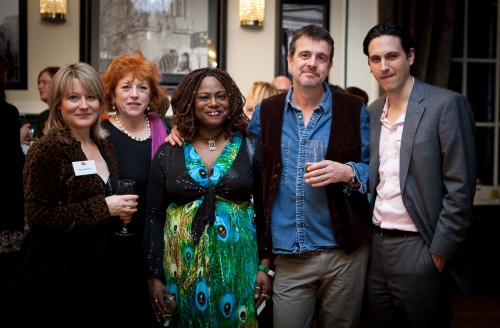 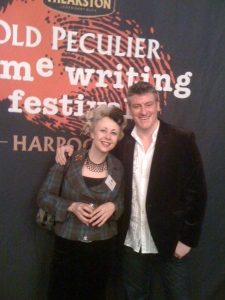 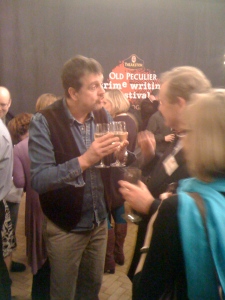 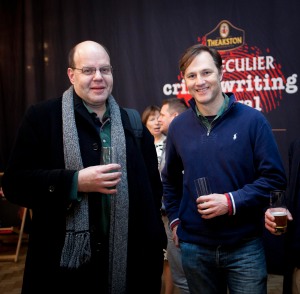 Photo of Mark Lawson & David Morrissey is by Sam Roberts. 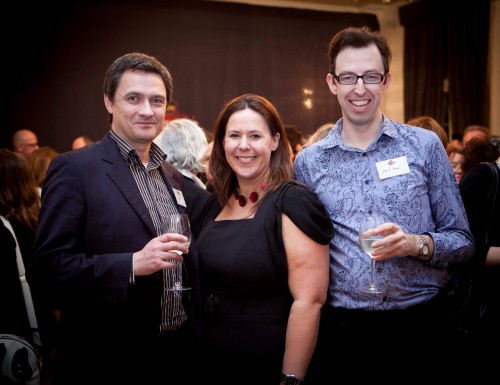 Harrogate: restorative spas, tranquil gardens, quaint teashops. Believe us, you’ll need them. Brace yourselves. Cordon off the flowerbeds, lock your valuables in the hotel safe, and steady the old nerves with a pint of Theakston’s finest ale. The Theakstons Old Peculier Crime Writing Festival is back in town.

On this year’s programme you’ll see more of the biggest names in the business than ever before with Special Guests including David Baldacci, Linwood Barclay, Lee Child, Martina Cole, Lisa Gardner, Tess Gerritsen, Dennis Lehane and Howard Marks. In addition to all this blockbusting talent this year’s Programme Chair Dreda Say Mitchell has injected some true grit into the line-up as we invite you to take a walk on the wrong side of the tracks.

We’re placing you under the protective custody of the Theakstons Old Peculier Crime Writing Festival for one long, criminally good weekend. You’ll be put under house arrest in Harrogate’s (quite lovely) famous Old Swan Hotel. Don’t worry, rehabilitation awaits thanks to the world’s finest crime writers at Europe’s most arresting literary event.

Welcome to the crime-writing world’s answer to the Oscars with host, Mark Lawson. It’s easy to let the glamour and the glitz go to your head but a pint of Yorkshire’s finest ale, Theakstons Old Peculier, will help you keep your feet firmly on the glorious northern ground. The anticipation is worthy of the best nail-biting thriller – which of the line-up of likely suspects will be taking home crime fiction’s most hotly-contended award? Watch the winner kill off the competition, and then continue the celebrations and commiserations at the Festival opening party. 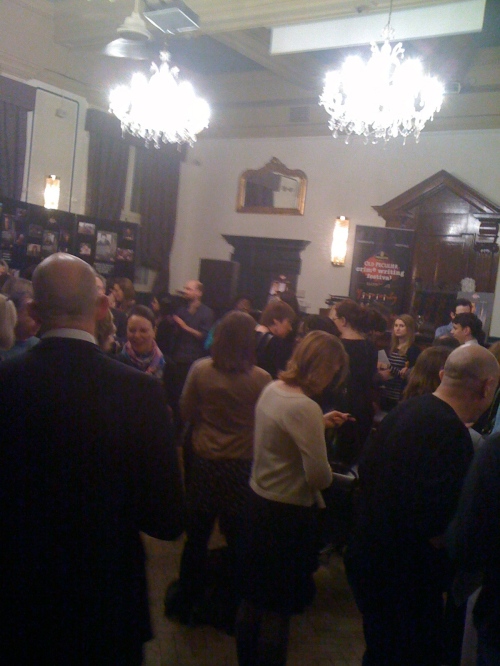