Sympathy for the Devil by Howard Marks 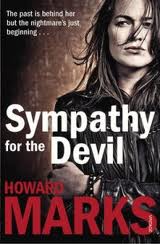 Often an issue for a first time novel is the author putting too much of themselves and their background into it.

This I felt was, however, a rare case in point where I was pleased to see that despite some drug references within the plot, clearly the previous non-fiction titles (including Mr Nice and Senor Nice) have enabled Howard Marks to (mostly) get that personal stuff out of his system before embarking on this, his first foray into the world of crime fiction.

His name came as a something of a surprise to me, as I assume it did to others, when news came that Marks would be in attendance at this year’s Harrogate Crime Writing Festival.

For tickets to this and all the other great events go to www.harrogate-festival.org.uk/crime

Clearly he will be major part of festival Chair Dreda Say Mitchell’s planned line up for this year which promises a real cross-over from real to fictional crime – likely going into areas previously absent from past years’ events.  Though I still hope the event will remain as friendly and safe as before – he says, zipping his wallet away!

Okay, so now to the book.

In short, it has its flaws, but I really enjoyed it and loved the central character of Detective Catrin Price and closed the book wanting to read more of her in future books.

It’s the tale of her search for the truth surrounding the death of her ex-boyfriend, Rhys, ex-copper and junkie who is found dead.  Catrin knows that Rhys was haunted by an old case, to the point of obsession he’d been seeking what had happened to Owen Face – a lead singer in a Cardiff based rock band ‘Seerland’ who was suspected of jumping from the Severn Bridge.

The singer’s disappearance and suspected death had left behind a legion of fans.  Using the suicide of a rock star echoes the real-life cases of many a similar character, Michael Hutchence, Kurt Cobain and, probably most closely due to location and the mystery of a ‘presumed’ death that of Richey Edwards of The Manic Street Preachers.

Having to deal with a superior officer, Della Davies, who had a relationship with Rhys before he died only adds to Cat’s troubles and then someone else arrives on the scene to add yet another spin on the events.

Film-maker and ex-copper, Huw Powell, shows her a reel of film that appears to show something approaching a low budget horror film or signs of occult goings-on.

I found it an entertaining enough ride, but one that was perhaps a little overloaded and overlong.

It felt as though, potentially there was enough material here for two Catrin books – and I sincerely hope that there will be another, I just hope that he has some material left to use and he’s clearly packed a lot into this one.

I rarely make any comment about book jackets, but feel the need to on this occasion- mainly because it is different to most other crime novels out there on the shelves.  I’ve shown here two versions of the jacket.  I received the copy with Catrin and her motorbike on the front, the second one with the close up appears in the bookstores now.  It just felt a bit more like a travel or adventure book (not unlike something you’d see on the cover of McGregor and Boorman’s next motorbike adventure book).

I fully appreciate that most crime books steer clear of using photographic images or full faces and shelves are awash with half shadowed faces and figures.  But, whilst it’s nice to have a change from that (and it’s only my humble opinion here), I do like to read a book and imagine the characters for myself rather than be given their photo before I’ve even begun.

All that said, Sympathy for the Devil has earned a place on the crime shelf here at home and in the crime fiction community so I look forward to seeing what book two will bring.