Out now from ILEX 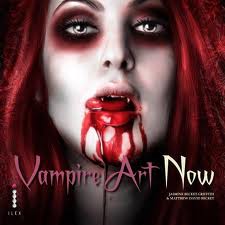 Whether your preference for vampires is the classic Dracula, the sinister Nosferatu, the seductive gothic characters of Twilight or the neck-ripping ghouls of other recent movies like 30 Days of Night, this book has amazing artwork throughout to sate every taste (literally).

Coming from the same publishers (ILEX) as the superb ZOMBIES – An Illustrated History, once again this does not disappoint on any level.

Everything from simple cartoon-like images, through finely detailed illustrations and paintings to some terrifying photo-manipulated images are here, with sections on everything from Gothic Quarters to Vampire Hunters and the Hunted.

With text limited to the detail of each panel and some information on its source, no room is spared other than that for the bloodsuckers that threaten to leap from every page, to seduce and to bite in equal measure.

With a foreword by vampire fiction author Rachel Caine and an introduction by the joint authors of the book, the question that comes up is why this book hasn’t been assembled before – it’s clearly an (if you’ll excuse the pun) undying trend with vampires in films, books and comics constantly being sought out by legions of fans.

Buy it, buy two copies (at least), maybe three, because every one of these images suits and cries out to be framed.
Looking for inspiration for your writing, a costume or your own painting and illustration? – If it’s creatures of the night you’re after, look no further.

Beautiful and yet deadly – and available right here or  here.

My Saturday morning was an early start, and I do mean early (particularly for Harrogate). I was set to interview C.J.Box in the Holiday Inn breakfast room at 8am before dashing back to the Old Swan for the 9am Special Guest talk by Tess Gerritsen.

Not wanting to chat over too much munching, I took my breakfast by 7am and then, at 7.30am texted his publisher to let them know where I was seated so he could find me at 8am (not all of us wear a great big cowboy hat for ease of identification, so I’d gone with a t-shirt with a great big fingerprint on the front). Unfortunately there had been a breakdown in communications – and I received a text back. The planned 8am meet and then taxi trip with Mr Box and his luggage to the Old Swan had seemingly become an 8.50am meet and a walk to the other hotel. I couldn’t see how I was going to conduct an interview whilst walking along the streets for less than ten minutes, so I had to make an early phonecall to explain that, as I was covering the whole festival this really was the only slot I had to do the interview (bad as that felt, it was the truth) and by 8am I spied the man in the hat entering the breakfast room – Mr Box had arrived, so it was coffee and down to business.

C.J.BOX INTERVIEW TO BE POSTED SOON.

8.55am and it was time to bid a fond farewell to Mr Box and to make a run to the festival hotel to take a seat at the back of the packed hall for Jenni Murray to take the stage and introduce Tess Gerritsen.

Thanking her for ‘The Surgeon’, which Murray described as a novel which made her keep checking her lights around the house and that doors were locked, Tess thanked Murray and stated that it was her first time sharing a stage with a Dame.

Tess went on to say that the whole premise of the danger of blood tests and medical records being used by a surgeon to find next victims was too good a concept to pass up. She said she’d always felt a little like an outsider – closest to Jane in her novels – her being a character who in a way ‘gave birth to herself’, and meant that she couldn’t kill her off – which was the original plan.

Turning to her latest novel ‘The Silent Girl’ – the book draws on her own Chinese heritage which she described as a topic ‘we don’t often talk about in the US – too uncomfortable’. Some time back she’d planned a book with an Asian character in a romance and was advised not to as it wouldn’t sell.

‘Many of us as a minority do a subconscious head count when we enter a room.’ Her father had a frayed jacket – her mother said it would make everyone think Chinese don’t know how to dress – ‘we all watch and make sure we’re all behaving as a culture/race’.

She then went on to cite a favourite story ‘Journey to the West:- The Monkey King’ – If you do not avenge the wrongs by your parents, you are not worthy as a person, it’s a Chinese rule to be a worthy person.

Staying with ‘The Silent Girl’ she was asked if the swords skills and Martial Arts in the novel were based on knowledge or research, to which she said that her son has studied Martial Arts for some time. Martial Arts have a long cultural history and belief in Chinese female warriors – it’s a very old theme, not just in Hollywood. Jenni then asked Tess if the kitchen scenes in the book were autobiographical and if the little girl’s comments and memories are of her own father, with all the tiny knife cuts and scars on his hands. She agreed that absolutely they were – her father had a hard job in a hard world and writing those scenes had really moved her as essentially she was writing about her own childhood and her own father.

Conversation then moved to ‘The Bone Garden’ – a book which came to her when she’d read of child bed fever – such a disturbing scenario which she felt compelled to write about as a piece of medical history – and it was something that could have been prevented.

A lot of readers cite ‘The Bone Garden’ as a favourite, but it was not a best seller compared to her other novels. Tess said that in her work she is always looking for constant tension, conflict and crisis in everything she writes. She ‘seesaws’ between books, with Rizzoli and Maura taking turns at centre stage – subconsciously they are like a married couple – they tend to make up again in the next one.

Many readers liked Rat in ‘Killing Place’ and that character will take centre stage in her tenth novel in a similar way to her bringing Detective Barry Frost forward in ‘The Silent Girl’.

Readers clearly know what they want and expect from Tess Gerritsen. She described a reader approaching her whilst on a tour for a Space Programme book and telling her she wanted her to ‘write a twisted serial killer book with sex’ – the reader in question was a teacher of eight year olds. Her readers were once polled and ‘women as victims’ was the preferred genre, it provides the largest readership (women) with their worst fears to read.

But, she maintains, that it’s very important to identify both with the hero and with the victim/s. The character of Jane Rizzoli ‘started off as classically a bitch!’ but she’s evolved as life has become fuller, married, settled, has child. Maura Isles is very different – constantly struggling with her relationships.

TG: ‘I know a lot of smart women who have made bad decisions when it comes to men’ JM: ‘So do I!’

Tess said that having children makes you fearful, makes the world a scary place and she added that Stephen said, of having children, that ‘the world has teeth’. Jane Rizzoli loves her job vs. a husband who doesn’t want her to lose her life or leave her child without a mother.

The television series ‘Rizzoli & Isles’ has hit the highest ratings in the US and a second season is underway. In the UK, Alibi TV will start screening the first season this September. The pilot episode is ‘The Apprentice’ and ‘The Surgeon’ combined and Tess commented that it’s a very rare thing that the full team behind the show is female.

The writers wanted to know if Jane Rizzoli had a middle name – so they could use it in a future storyline – so she had to think one up for her then. As is often the case with books to tv, changes are made, but the casting of a 6’ tall model, Angie Harmon, as Jane came as quite a surprise to fans. There is no husband character in the television show – they wanted to concentrate on the relationship between the central characters – as a result of this the show has also gained a large lesbian following. Also lined up to play Maura’s adoptive mother is Jaqueline Bissett and Maura is played by Sasha Alexander (of NCIS fame). 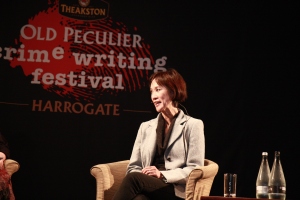 There then followed the customary Q&A section of the session, this kicked off with the question of why women appear to like books where it ‘could’ happen to them – Tess responded that it wasn’t dissimilar to children wanting to read books about things happening to children in their books.

For advice on writing, she suggested writing a first draft right through – no revisions – just write to the end and then, edit! As to which narrator to use to tell the story she simply said that if you can ‘hear the voice, then that’s the one to use’.

Her mother learned English through US horror films – so much of Tess’s childhood was spent in screaming cinemas. Invasion of the Bodysnatchers (the B&W version) was the one that left her most deeply affected – ‘the person you love is no longer the person you love.’

Her mother thought her books weren’t scary enough, and a friend of her son’s simply said ‘Dude. Your Mum’s sick!’

Of her own books ‘Gravity’ is a favourite – she read about the theme in a journal and had a ‘what if?’ moment. She described it as a little like ‘Alien’, to which Jenni Murray responded ‘Not read that one – not sure I shall!’

Tess then spoke of the effects of the tv series on her characters and said she does plan to rewrite the characters as she goes. One possible change is Barry Frost – described as pale in the books and played by an African American actor (Lee Thompson Young) in the tv show!

She spoke of writing scary scenes and the process she uses.

She builds tension – the monster can get you at any time he wants, but he hasn’t chosen to do so – yet! The prelim to an attack is far scarier than the actual attack – her horror movie watching clearly helped her develop this technique. She describes herself as agnostic – as a scientist – always requiring proof and that’s how Maura is.

Tess’s mother and aunties have seen lots of ghosts – she hasn’t.

Her mother told her that she hasn’t seen ghosts because ‘we live in America. America is too young!’

And then Jenni Murray wrapped things up by pondering the thought as to whether Tess Gerritsen would be thrilling the world with her great novels if her mother had taken her to see Hollywood musicals instead of horror movies….