THE BUNKER by Andrea Maria Schenkel

Translated from the German by Anthea Bell.

Not a new novel, but when I saw this neat little book and took a quick read of the blurb and the first couple of pages, I was hooked.  Essentially a two person act, with Monika the central character being snatched away and kept locked up for reasons she believes must be linked to a crime set in the time of her childhood, and her captor as the other character, this is a taut and powerful tale well told as it switches from one perspective to the other alternately with interspersed details of hospital treatment to person/s unknown as the story is told between them.

Clocking in at under 180 pages, it manages to be a book I’ll likely remember a lot longer than many weightier books I’ve read this year and, whilst the subject matter may be fairly well trodden territory, BUNKER manages to make everything seem fresh – disturbingly so.

On the strength of this read I went straight out and purchased a copy of THE MURDER FARM, Schenkel’s first novel.  Can’t wait to read that and more of her work. 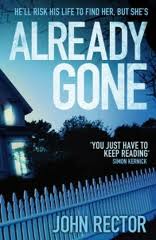 If you are looking for a new author to read then make me a promise, put John Rector on your Christmas list.

This is the third novel of his I’ve had the pleasure of reading and I really don’t think the guy’s put a foot wrong.  Each novel is a stand-alone, but I think this latest is likely to be his biggest and most commercial hit – so, jump in with ALREADY GONE and then you can seek out THE GROVE and THE COLD KISS afterwards.

The covers shown here are the US jacket (with the birds in flight) – which immediately made me think of Stephen King’s The Dark Half and the UK cover on the right (a colder, more chilling version of a cover similar to a Harlan Coben novel I thought).  As it turns out, if you could, and if you wanted to do such a thing, place Mr King and Mr Coben in a blender (or maybe just their books would be less grisly) and mixed them up, John Rector has the best elements of both of their works in his.

His central character this time round is Jake Reese, an ordinary guy with an ordinary job, but with a past that is about to literally come back and beat him, leaving him assaulted in a car park, less one finger.  I initially thought the book was about to veer down the ‘History of Violence’ story route, but was surprised to discover that it’s when Jake’s wife, Diane, is stolen away from him that it’s also her past that plays a key role in the events about to play out.

This is clearly a shot at the Linwood Barclay and Harlan Coben style of book, and that’s no bad thing at all.  I was about to cite Coben’s ‘Tell No One’ as probably the closest to which I think this is, but have just spotted that very same comparison in the publisher’s blurb on the rear of the UK book.  It also has all the great ‘race against time’ elements that often frequent books by authors such as Simon Kernick, with some great pacing and really nice twists.

As soon as I mentioned it on twitter on Friday night (when just 4 pages in) I received comment saying that I was bound to finish it over the weekend – I raced through it in just two sittings – pausing only for sleep.

For fans of any of the authors I’ve made tenuous cross-reference to above, or those who like their plots fast and along the lines of great recent French crime movies like ‘Anything for Her’ or ‘Point Blank’, this is for you.

ALREADY GONE is a little different from John Rector’s other novels, but consistent excellence in storytelling is already proving his calling card.

Highly recommended – get your orders placed.

BLACK LIGHT comes from two of the men responsible for penning such cinematic terrors as SAW IV, SAW V, SAW VI, SAW 3D and THE COLLECTOR (which they are currently filming a sequel to) and they are joined by acclaimed author, screenwriter and illustrator, Stephen Romano for this, their first novel.

It is, as you would expect, another walk on the dark side, or – in this case a high speed train ride (up to 500mph!) through the darkness as we join central character, PI and exorcist, Buck Callahan as he’s hired to cimba aboard the ‘Jaeger Laser’ bullet train for its debut, and politically sponsored, journey.  The reason for Buck being asked along is that the route of the train will take leads directly through a triangle of the most deadly ‘marks’ – tortured souls who refuse to leave the earth – and Buck has a particular skill in being able to drag them into his own body to then expel them.

He also takes the mission as he suspects it may help him find out what happened to his parents, whose deaths had something to do with the train and its route.

This is an occult action movie crying out to be made, full of witty PI asides and a great central character – not as gruesome as I would have expected (given the authors’ pedigrees) but I think it’s a good thing that they didn’t trade fully on that aspect.  It races along almost at the same speed as the train in which most of the action takes place.

Forget ‘Snakes on a Plane’, I can’t wait till this is made into a movie and I stand in line to buy a ticket to ‘Souls on a train’.