HARROGATE HITLIST: The Stranger You Seek by Amanda Kyle Williams 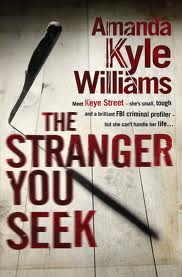 The last sound she heard . . . was the tiny crack of her neck, like a wishbone snapped in half . . .

In Atlanta, Georgia, a vicious serial killer is at loose, luring victims with ease, killing them with a combination of precision and twisted brutality.

Keye Street is not happy. Formally a rising FBI star, with two university degrees and a brilliant track record in criminal profiling, she’s now working for herself as a bail recovery agent. It’s not exciting work, but it keeps her agency afloat.

So when her friend and mentor, Lieutenant Aaron Rauser, wants her on his case, Keye is reluctant to help him out. That way, obsession lies, and she knows her demons. But when he shows her a letter he’s received from the killer, Keye feels a familiar excitement. They’re being played with, the snare is set, and Keye just can’t resist picking up the bait . . .

From its great cover, to the quote from Karin Slaughter, to the comparisons with Slaughter, Tess Gerritsen and Patricia Cornwell, this cracking debut delivers as a crime thriller which is simply on a knife edge every step of the way. Presenting a welcome new investigator to the worlld of crime fiction, I found ‘The Stranger You Seek’ to be a lot more believable than many a serial killer based novel, mainly because the central character and her team have other crimes to concern themselves with, there’s always something else they have to contend with. In Aaron Rauser’s own words ”And it’s not like the other shit stops just ’cause we got a serial, you know?’

With much of the killer’s taunting via letters, I couldn’t help but think of the ‘Dear Boss’ letters from Jack the Ripper and they work in the same chilling way. The relationships within the book worked well, the plot had me tripping up several times along the way with every twist of the knife and, oh those knives!  I would well imagine that, based on the evidence here, Williams could find herself included in future debates about women portraying some of the most violent acts in crime fiction – she’ll be at Harrogate this year, so we’ll see…  A really enjoyable debut, with a central character who you’ll want to read more of, and one of the best scenes involving a cow I’ve read in a long while (since a certain C.J.Box novel as I recall).

One response to “HARROGATE HITLIST: The Stranger You Seek by Amanda Kyle Williams”