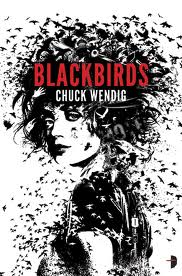 Miriam Black knows when you will die. Still in her early twenties, she’s foreseen hundreds of car crashes, heart attacks, strokes, suicides, and slow deaths by cancer. But when Miriam hitches a ride with truck driver Louis Darling and shakes his hand, she sees that in thirty days Louis will be gruesomely murdered while he calls her name. Miriam has given up trying to save people; that only makes their deaths happen. But Louis will die because he met her, and she will be the next victim. No matter what she does she can’t save Louis. But if she wants to stay alive, she’ll have to try.

For some time now I’ve been following Chuck Wendig, reading his entertaining and informative writing blogs at his website terrible minds.com, listening to him on writing interview blogs at Angry Robot and The Creative Penn, and downloading his writing guide books for my kindle.
I was more than a little apprehensive about biting the bullet and checking out his fiction, but the buzz surrounding Blackbirds was too strong to resist and disappointed I most certainly was NOT.
Miriam Black is a masterful character – gifted/cursed with the power we’d all struggle to decide if it was a good or bad thing – she can tell how people will die, but cannot do anything to prevent the events from occurring.
From it’s great premise and stunning cover (zoom in to see the details within Miriam’s hair) you could be mistaken in thinking this is Young Adult fiction, but be warned – Blackbirds is tough, brutal, sweary and bloody – oh, and it’s excellent in all those ways too !
Now to grab a copy of the sequel ‘Mockingbird‘ ahead of the next book to also feature Miriam ‘Cormorant’.
I don’t know where Mr Wendig finds the time and energy to be in so many places at once and so good in all of them, but I’m damn glad he does.

2 responses to “Blackbirds by Chuck Wendig”