Craig Robertson takes a break from packing his case for Harrogate to drop by for a quick chat.

Ahead of his appearance at the Harrogate Crime Writing Festival, where he’s sharing a panel entitled ‘Wrong ‘Uns’ with Mandasue Heller, Denise Mina, Alex Wheatle and chaired by James Twining, Craig Robertson dropped by to have a quick chat with Books and Writers as the ink dries on the first draft of his third crime novel.

I can’t wait for book three, as I loved both Random and Snapshot. 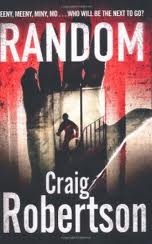 I think I’m right in saying that last year you were at Harrogate on the Creative Writing day ? (as was I).

Clearly, you did a lot better than I since then, so would you be willing to take a break for a while, now you have two great books out there and a third one drafted, so you can come and deal with my family whilst I give this writing lark a shot?  Let me know dates that suit you (3-4 months end of this year should do for a start).

No, I read online somewhere that someone had met me at the Creative Writing event but whoever he spoke to, it wasn’t me as I wasn’t there. I was in Harrogate that day but I was at the Alibi lunch where the shortlist was announced for the CWA New Blood Dagger. I remember it because I somehow made the shortlist for Random! No problem on the job swap though, I could probably do a month from the end of September if that’s any good.

Did you find the writing of Snapshot any easier than Random?  Or was it the typical harder ‘second book’ that we always hear about?

I certainly didn’t find it easier. Mainly because I’d had all the time in the world to write Random but suddenly found myself with a good bit less than a year to write Snapshot and, at that time, I was still working full-time as a journalist. There was also the added pressure of expectation, some self-imposed, because Random had done quite well. There was quite a bit of work on the second draft but we were happy with the result.

I love the way that, whilst Random appears to end with no possibility of a sequel, that you have managed to maintain a thread into Snapshot by characters – is this something we can expect again in book three?  And further on into future books?

Yes, the principal characters from Snapshot (Tony Winter, DS Rachel Narey, DI Derek Addison and Danny Neilson) all reappear in Cold As The Grave. I liked the characters plus it saves me having to work on new ones! The plan at the moment is that they will all feature in book four as well – if they survive book three…

Favourites would include James Ellroy, Elmore Leonard, Louise Welsh, Ian Rankin and Allan Guthrie. I couldn’t honestly say that one writer or book inspired me to write. It was all of them and none of them.

Can you tell me a little about your writing regime/day?  Are you very disciplined?

I am extremely indisciplined. I get up late, potter about, fence with every possible distraction and only once I have exhausted every avenue for procrastination do I drag myself kicking and screaming to the keyboard sometime well after lunch. Which is all a bit silly really because I actually love writing. So much so that despite, or more likely because of, the late start, I often work beyond midnight. Two in the morning is not unusual and that inevitably leads to another late start.

Where do you write?  Can you give a bit of an insight into what you surround yourself with at your desk, or can you write more or less anywhere?

I write either at the PC in the dining room of my home in Stirling or on the laptop wherever else I may be, usually Glasgow. I am surrounded only by distractions and the proximity of food. I rarely have reference books at hand, relying on memory or the world’s favourite search engine. Having worked in a loud newsroom for years, I can write anywhere and that’s pretty handy.

I hope to catch as many panels as possible but will be making a particular effort to catch Dennis Lehane, Howard Marks and Lee Child. Other than that I am looking forward to meeting my agent as he will hopefully be on agency expenses and I will be expecting free beer. I will happily chat to anyone, whether they are buying beer or not, so do come and say hello.

What, for you, is the best part of being a writer and which bits of that do you enjoy the most?

I love the freedom to work when I choose and, more importantly, when I don’t. I was never very good at having a boss and being my own suits me just fine. That apart, I just love the process of putting words together. Forming sentences that become paragraphs that become pages and chapters and, against all odds, become books. I find it fun rather than work.

Do you download ebooks or own an ereader?  Do you have anything to say about them and the way they are becoming more commonplace?

Is there a crime novel that you wish you had written?

Ellroy’s The Black Dahlia perhaps. It’s as noir as it gets but is a great argument for crime fiction as serious literature.

Do you have a favourite crime movie or tv show?

Favourite crime movie is a toughie. If I had to choose then The Usual Suspects might edge out Angels With Dirty Faces, City of God or Godfather: Part 11. TV show might be NYPD Blue although I’d have a shamelessly nostalgic vote for Starsky and Hutch or Kojak!

Can you tell us a bit about your writing before the deal was struck with Random?  Any other previous manuscripts that might be revived from before that and published in the future?  And has it always been crime that’s been your subject of choice?

My writing pre-Random had almost entirely been confined to journalism. There were no previous attempts at novels and only one short story that I can think of and that was about twenty years ago. Which makes me either lucky or a bit of a fraud, I don’t know which. That being said, journalism was excellent training in how not to waste words, the importance of openings and impact – and of meeting a deadline. I’ve always been interested in crime. Family lore has it that was down to being read Agatha Christie novels as bedtime stories when I was three…

Is there one piece of writing advice that’s been told to you that you’d pass on to others? Or do you have one of your own to offer up?

I can’t remember any particular advice and apologise if there’s anyone I am doing a disservice on that count. The single piece of advice I would offer is not to give up. I stopped writing Random umpteen times across the years, thinking that I was wasting my time, and am rather glad I stuck at it.

Who would play Craig Robertson in the movie of this crime writer’s life?

Blimey, I don’t know. Maybe Robert Carlyle if he reverts to his shaven-headed past. Scottish, only a year older than me and has experience of playing moody, bad-tempered headcases.

Guinness. And black pudding if you are buying snacks as well.

Cheers for stopping by, Craig, looking forward to your panel at Harrogate and to reading that book three as soon as it is unleashed.

3 responses to “Craig Robertson takes a break from packing his case for Harrogate to drop by for a quick chat.”