A very eclectic mix of books were up for this year’s TV Book Club ‘Summer Read’ series by Specsavers, and, for once, I decided to put the put the crime titles (Dennis Lehane’s Moonlight Mile and Camilla Lackberg’s The Hidden Child) to one side to open my own reading to some titles I wouldn’t have usually picked.

This was also influenced more than a little by the fact that I’d kindly been invited, along with a small group of other bloggers and a book reading group, to watch the last two episodes of this summer’s show being recorded. 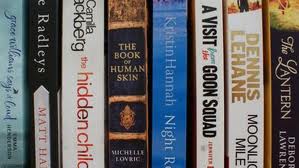 So, the week prior to the filming, I read ‘The Radleys’ by Matt Haig (see earlier review) and, on the day of filming I raced through ‘Grace Williams says it Loud’ by Emma Henderson in various coffee shops across London as I made my way to the Cactus Television studios in Kennington.

I must confess to finding the book a difficult read for its subject matter, which deals with the inner voice of a severely handicapped girl and her time at Briar Mental Institute and terrible abuse she suffers there, and also for the lack of an uplifting ending which I both wanted and needed.  Some of the sections of the novel are the stuff of horror stories and I wanted to question who would make such things up in the name of fiction.  The short film we were shown (which forms part of the show) showed author Emma Henderson describing that ‘Grace’ was based on her own sister and the horrors she wrote of were those she was told were going on at her sister’s own mental health home.  That, if anything, made it even more disturbing for me and the whole uplifting thing and the character of ‘Debonair Daniel’ lifting Grace from her traumas was, I have to admit, lost o this reader amongst all the horrific abuse that took centre stage a lot of the time.

Nevertheless, it’s a book I’ll remember, partly for cramming the reading in before the filming, and one I wouldn’t have experienced had the show not give me the chance and suggestion to widen my reading – even if I did go running back to the safety of the guns and knives of my comfort zone of crime fiction very soon afterwards!

The recordings themselves I find remarkable for the fact that they are done and dusted in about forty minutes (bearing in mind the show’s only thirty minutes including titles and an ad break.  Whilst the cast on the sofa (which comprised Jo Brand, Rory McGrath, Meera Syal and Stephen Tompkinson for both shows) clearly have had a little time to read and chat about the books before the recording and have some autocue assistance, the wildcard of having a guest reviewer on each show who is literally dropped onto the sofa and then leaves shortly afterwards is handled very well by all concerned.

For The Radleys episode we had the lovely Andrea Corr as guest reviewer and the discussion kicked off about her work on the Alan Parker movie The Commitments – which led to the forming of The Corrs as a band.  The cast asked if there was an unattractive, short, tone-deaf Corr sister that they kept hidden away from the public and Jo Brand said she was the one!

The second episode featured Celia Imrie as guest reviewer and there was a very interesting moment when she gestured to the audience and referred to us as ‘you’ – the whole concept of the show is that there isn’t an audience in the room, so I look forward to seeing if that gesture remains in the show and how it looks when it airs on 14th August, as potentially she broke the wall of television.

The really interesting comment that was made at the recordings was by Chief Executive of Cactus, Amanda Ross, who told the visiting book group that they have a big advantage over the tv sofa version because they can talk about endings to books – the celebrities on the show cannot give any major plots or endings away and it was interesting to see how conversations were steered to avoid this pitfall on the day.

A thoroughly enjoyable and varied selection of reads this Summer and a very hospitable cast and crew at the recordings who made us all feel very welcome.

You can catch the shows on Channel 4 and More 4 and catchup on 4 OD (on demand).